Did you have vintage TV trays at your house when you were growing up?  We sure did and every Sunday night we would use them to have dinner in front of the TV to watch the Wonderful World of Disney!  Such wonderful memories were made around those vintage TV trays 😊
What things do you have in your home that you just don’t want to get rid of because they conjure up cherished childhood memories?  A wonderful friend of mine had some vintage TV trays from her mom’s house and she just did not want to part with them because of the memories they held.  They were banged up, rusty and stained and she had no idea what to do with them she just knew she didn’t want to get rid of them.

There were 3 total and she wanted one to be transformed for her and one for each of her boys.
After throwing around some ideas, I decided to make a memo board out of hers.  I wanted to save some of the integrity of the design, as that was particularly important to her, so I diluted some Chalk paint into a wash for the inside area of the tray.

After covering the inside, I used a Rustoleum paint to cover the outer edge of the tray.  In order to give it a more aged look, I used sandpaper to distress all of the paint once it was dry.  Because the TV tray was metal, it was perfect for magnets and easily converted into a memo board for her office.

The remaining 2 trays were going to be given to her sons and she wanted them to be usable and fun.
I covered each with a coat of Rustoleum spray paint in a beautiful blue colour and then painted roads on each.  The boys can both hang their trays on the wall like art and then take them down to drive their toy cars on them.  It was the perfect pairing for little boys 😊

I love projects like this!  We were able to save these vintage TV trays with incredible sentimental value from the trash pile and make them both beautiful and useable again.  Win win!
Read the story behind the TV trays and why they held so many special memories… 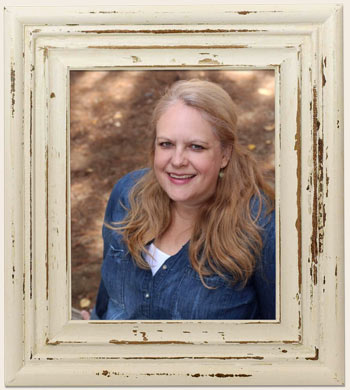